Islam and the Abortion Debate 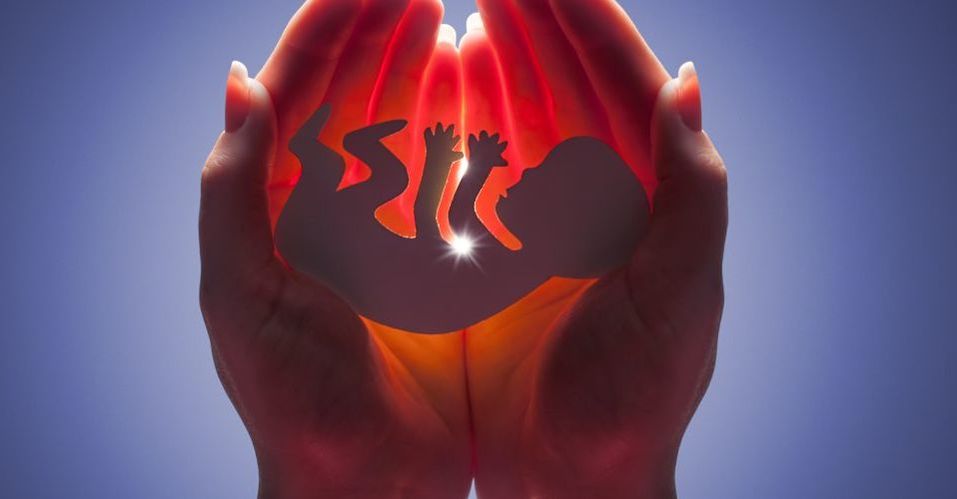 Many contemporary scholars offer spiritual counsel to those considering a pre-40-day abortion. That counsel largely falls in the capacity of encouraging one to continue with the pregnancy unless there is a danger to the mother or fetus, while still leaving the door open to those who choose otherwise. According to Dr. Hatem Al Haj, “Abortion in the first forty days of pregnancy upon the mutual agreement of both parents is permissible for a legitimate cause, such as the woman’s fear of not having the capacity to raise a newborn. Having said that, it is always preferable to avoid that, and if one relies on Allah’s help and puts his/her trust in Him, He will not let them down. That fetus may become their favorite child one day.”[13]
Comparisons to Other Religious Groups
Like the multifaceted shadings of Islamic law on this issue, other faith traditions have various opinions on the crucial elements surrounding these debates. The Catholic position is generally the most firm, with Pope Francis famously saying, “It is horrific even to think that there are children, victims of abortion, who will never see the light of day.”[14] Before Francis, Pope John Paul II wrote the Evangelium Vitae (i.e., the Gospel of Life) which affirmed that life is sanctified from conception.[15] Yet, centuries ago even the Catholics had some room for debate on this topic. Before 1869, the Church held a similar position to Islamic jurists that tolerated abortions for various needs before the fortieth day of pregnancy.[16] It is also noteworthy that, in complete contrast to the Islamic position of prioritizing the life of the mother in all cases, the church preferred the life of the fetus to that of the mother on the basis that the mother has already been baptized and is guaranteed salvation while the child has not yet been provided with such an opportunity.[17] The United Methodist Church affirms that it is, “equally bound to respect the sacredness of the life and well-being of the mother and the unborn child.”[18]

The Lutherans and the Evangelicals generally view abortion as immoral at any point unless it is to prevent the death of the mother, and in some cases of rape and incest.[19] This is also the general position of the Church of England which “combines strong opposition to abortion with a recognition that there can be -strictly limited- conditions under which it may be morally preferable to any available alternative.”[20]
The time stamps provided by Islamic jurists are generally not found in Protestant opposition to abortion with emphasis only on the extreme circumstances which may provide room for exceptions. Many churches in their opposition to abortion and contraception focus on the immorality of abortion as a “primary means of birth control”[21] or for “personal or social convenience.”[22] Islamic scholars generally share the same concerns while not frowning upon contraceptives.
On the question of legislation, American Baptist Churches condemn abortion yet don’t take a hard stance against it, opting to encourage their membership to “seek spiritual counsel as they prayerfully and conscientiously consider their decision.”[23]  The Presbyterians generally disapprove of abortions yet affirm them to be personal decisions that should be left to the parents and not “restricted by the law.”[24]
Traditional Jewish literature contains many classical debates that one also finds amongst Muslim jurists. While the reform and conservative Jewish movements openly advocate for the right to abortions, Orthodox Jews remain divided upon the issue with most leaning in opposition to abortion except in extreme situations.[25] Like Muslim jurists, Orthodox Jews emphatically rejected abortions for reasons such as fear of poverty or fear that the child may have non-life-threatening medical issues, yet the main debate concerns whether or not a threat to the life of the mother is the only exception to the rule. Jews, like Muslims, also always prioritize the life of the mother over that of the fetus at any stage of the pregnancy. Lastly, Orthodox rabbis also commonly bring up the point of gestation as to when exceptions can be applied with the 40 day from insemination mark frequently found in classical debates.[26] The degree of prohibition that exists after 4 months of pregnancy is quite unique to Islamic scholars who base it on the famous Prophetic tradition that mentions that the angels breathe in the soul of the fetus at that point.
Practical Realities and Moral Directives
Advocates of Planned Parenthood point out that their services primarily provide low-income and uninsured people access to contraceptives and sexual health care.[27] In 2009, Planned Parenthood’s abortion care represented only 3 percent of its medical services (332,000 terminations out of a total of 11.4 million services).[28] Beyond statistics, it is quite obvious that access to contraceptives naturally reduces the need for unwanted pregnancies, which may result in abortions. Islamic legal theorists always point to the priority of preventing unwanted circumstances instead of simply remedying problematic outcomes. That includes reforming the moral ethics of society as well as the inequities that disproportionally force the marginalized into painful decisions.
The American Baptists, who unlike the Evangelicals and Catholics do not take an official position on the legislative debates surrounding abortion, still speak of the importance of denouncing “irresponsible sexual behavior and acts of violence that contribute to the large number of abortions each year.”[29] Yet they are just as clear in their condemnations of attacks on Planned Parenthood centers and abortion clinics and recognize the grief of those placed in difficult conditions. While abstinence and sexual ethics do not inform a significant portion of the debate, there clearly is room for them in the discussion.
Conclusion
In the Islamic ethical system, life is sacred, and hence must be honored and promoted. Having children is a shared right between spouses, and hence neither spouse should obstruct that right – before or after conception – without good reason. Contraception is permissible with safer methods being preferred. Once the woman’s egg is fertilized, it is impermissible to terminate the pregnancy without the mutual agreement of both parents. Once the fetus reaches 40 days from conception, abortion becomes impermissible according to most scholars, unless a pressing need exists which justifies it in the eyes of Islamic law. Once the fetus reaches 120 days, all scholars agree that terminating the gestation of a living fetus would only be allowed to save the mother’s life. Otherwise, it is unlawful feticide: the killing of a soul-bearing unborn human being. The scholars also deem abortion in the case of fetal demise permissible at any point, as the soul is no longer believed to be present.

Finally, many of the concepts above such as “good reason,” and “pressing need,” have all been traditionally qualified by expert scholars of the highest caliber. These terms are quite nuanced, and should not be seen as arbitrary words that can entail anything for anyone. For that reason, an expert that is versed in the Islamic sciences should always be consulted on a case by case basis to determine when an abortion is justifiable. The task of the scholar, by virtue of his/her qualifications, is to provide an expert opinion based on Islamic law that is tailored to the considerations of each person’s unique situation. That is the distinction between a ḥukm (ruling in principle) and a fatwa (specific edict).
As for the political discourse surrounding this subject, we do not subscribe to the position that contraception and abortion are categorically prohibited, nor to the position that abortion is the unrestricted right of the mother. All persons and things that God has created have rights assigned to them by Him. When possible, all of those rights should be preserved. In cases when rights conflict, priorities are assigned accordingly in light of divine revelation and prophetic guidance. Muslims should advocate for a comprehensive understanding of the issues that takes into consideration the peculiarities mentioned above.

[1] Collected by al-Bukhâri (6471) from ‘Abdullâh b. ‘Umar (rA)
[2] See: Zâd al-Ma‘âd (5/142-145), 7th edition, printed by ar-Risâla (Beirut, Lebanon), 1985
[3] Collected by al-Bukhâri (5208) and Muslim (3497)
[4] Due to the Prophet referring to ‘azl as a “hidden infanticide” in one hadith, some jurists held that it should not be performed due to fear of poverty, as that was a primary reason behind infanticide in Arabia. Others reconciled it with the traditions condoning ‘azl by saying: it entails discouraging ‘azl (not prohibiting it) because it undermines the blessing of children, just in a less overt (and less objectionable) way.
[5] Many physicians believe that with newer IUDs, the incidence of fertilization is much less likely than it was in the past, and hence the obstructing implantation debate becomes increasingly irrelevant concerning this method.
[6] In the 1960s, the American College of Obstetricians and Gynocologists redefined the onset of pregnancy as the completion of implantation in the womb, contrary to the prior majority belief that pregnancy began at fertilization. There is approximately two weeks’ time between fertilization and implantation, and redefining the terminology is entrenched in the legal debate surrounding this subject today. For those adhering to the newer definition, preventing implantation is tantamount to preventing pregnancy, while the opposition considers preventing implantation to involve killing a living being.
[7] Collected by Abu Dawud (1694), at-Tirmidhi (1/348), Ahmad (1/194), Ibn Hibban (2033), al-Bukhari in al-Adab al-Mufrad (53), and al-Albani in as-Silsila as-Sahiha (2/36: 520)
[8] Physicians calculate the age of pregnancy from the last period, which is roughly two weeks prior to conception. Therefore, 134 days into the pregnancy – according to physicians – is the 120 day mark in terms of Islamic rulings.
[9] See: al-Burhân al-Kâshif (p. 275) by Ibn az-Zamlakâni
[10] See: Tafseer Ibn Katheer; Surat al-Mu’minoon (23); Ayah 14
[11] The scholars unanimously agree that a wife is entitled to children, and hence she cannot be forced to terminate her pregnancy. The majority of scholars agree that the husband also has the same entitlement, and hence she cannot insist on abortion without a valid reason. See: Badâ’i‘ as-Sanâ’i‘ (2/334) by al-Kâsâni, al-Muntaqâ Sharh al-Muwatta’ (4/134) by al-Bâji, Fath al-Bâri (9/308) by Ibn Hajar, and al-Ifsâh (2/141) by Ibn Hubayra.
[12] al-Qawâneen al-Fiqhiyya (141) by Ibn Juzzay
[13] Abortion Due to Family Issues (taken from www.drhatemalhaj.com)
[14] Pope Francis denounces ‘horror’ of abortion. (2014, January 14). Retrieved February 10, 2017, from http://www.bbc.co.uk/news/world-europe-25723422
[15] John Paul II. Vatican. Evangelium Vitae. 25 March 1995. 19 March 2013. <http://www.vatican.va/holy_father/john_paul_ii/encyclicals/documents/hf_jp-ii_enc_25031995_evangelium-vitae_en.html>.
[16] Johnstone, Brian V. (March 2005). “Early Abortion: Venial or Mortal Sin?”. Irish Theological Quarterly. 70
[17] Ibid.
[18] Communications, U. M. (n.d.). Social Principles: The Nurturing Community. Retrieved February 10, 2017, from http://www.umc.org/what-we-believe/the-nurturing-community
[19]Life Library – Abortion. (n.d.). Retrieved February 10, 2017, from http://www.lcms.org/page.aspx?pid=849
[20]A Christian presence in every community. (n.d.). Retrieved February 12, 2017, from https://www.churchofengland.org/our-views/medical-ethics-health-social-care-policy/abortion.asp
[21] American Baptist Resolution Concerning Abortion And Ministry In The Local Church, 12/87. Online: http://www.abc-usa.org/wp-content/uploads/2012/06/Abortion-and-Ministry-in-the-Local-Church.pdf.
[22]The Church of Jesus Christ of Latter-day Saints. (n.d.). Retrieved February 9, 2017, from http://www.lds.org/ldsorg/v/index.jsp?locale=0&sourceId=43de991a83d20110VgnVCM100000176f620a____&vgnextoid=e1fa5f74db46c010VgnVCM1000004d82620aRCRD
[23] American Baptist Resolution Concerning Abortion And Ministry In The Local Church, 12/87. Online: http://www.abc-usa.org/wp-content/uploads/2012/06/Abortion-and-Ministry-in-the-Local-Church.pdf.
[24]  23, 2. F. (2016, April 05). Abortion Issues. Retrieved February 4, 2017, from http://www.presbyterianmission.org/blog/abortion-issues-2/
[25]What Do Orthodox Jews Think About Abortion and Why? (2000, August 25). Retrieved January 17, 2017, from http://www.slate.com/articles/news_and_politics/culturebox/2000/08/what_do_orthodox_jews_think_about_abortion_and_why.html
[26] Ibid.
[27]Coleman, C. (2011, April 15). Five myths about Planned Parenthood. Retrieved December 17, 2016, from https://www.washingtonpost.com/opinions/five-myths-about-planned-parenthood/2011/04/14/AFogj1iD_story.html?utm_term=.2a68350e3ad8
[28]  Ibid
[29] American Baptist Resolution Concerning Abortion And Ministry In The Local Church, 12/87. Online: http://www.abc-usa.org/wp-content/uploads/2012/06/Abortion-and-Ministry-in-the-Local-Church.pdf.

Disclaimer: The views, opinions, findings, and conclusions expressed in these papers and articles are strictly those of the author. Furthermore, Yaqeen does not endorse any of the personal views of the authors on any platform. Our team is diverse on all fronts allowing for constant enriching dialogue that helps us produce only the finest research.